After the Tasmanian devils we saw emus!

They went crazy over the feed… Once we’d seen the emus it was on to the kangaroos. Kenji really enjoyed feeding the kangaroos but wasn’t so keen on the smell or the swarm of flies that stuck to your skin. I hadn’t experienced bush flies in a very long time and I am not interested in seeing them anytime soon! Young Leilani really enjoyed patting the kangaroos, I must admit though that I was worried one might throw a punch as she is a little on the rough side. Fortunately, however all was good.

Last month we were privileged to be able to see some native Australian animals at Maru Animal Park.

Admission was about AUD$17 per adult and children under 2 were free. There was a slight concession for seniors but you needed to have a seniors card; a pensioners card wouldn’t do.

The first animal we saw was the Tasmanian Devil. Quite cute actually. You can see some shots below. Wishing you all a wonderful Easter. A season of re-birth and new beginnings. If there is anything you would like to try, now is is the time. For those of us who have gone back on our diets…now is a great time to get back on track.

Whatever it is you want to begin or start over, I wish you the best of luck♥

We spent a fantastic 17 days in Melbourne, Australia this month. I took my daughter Maya for her first trip to meet her relatives living in the land down under. My husband accompanied us and although it was his fourth time to Oz he had never seen a kangaroo in person until this trip.

I think the best day was on Tuesday the 19th March when we, my mum, dad, brother John and his family and a couple of others took off for a 2 hour journey to the famous Phillip Island. Perhaps the most memorable part of the trip for us was the stop at Maru Koala and Animal Park. It was there that my husband got to not only see a kangaroo up close and personal but also feed one. We were also surprised by an albino kangaroo…even I hadn’t seen one of those! When I say I’m from Australia, most Japanese people reply with “Oh Sydney!” or “Cairns?”  Even when asked “What’s the capital city of Australia?” people respond with “Sydney.”

Well it’s no wonder as Sydney is Australia’s most populated city.  4.4 million people inhabit Sydney. Its harbour is famous for its bridge and Opera House.

However, it only has 400,000 more inhabitants than Melbourne. I’m not sure why Melboune is not as famous as Sydney.  After all,  Melbourne was Australia’s first capital city. It served as the seat of government from the first parliament in 1901. The first parliament took place at the Royal Exhibition Building pictured below.

It was later moved to the Victorian Parliament Building until 1927. As a Melburnian, I must say that I am very proud of my city and believe that it should’ve remained Australia’s capital but it didn’t.

Australia’s capital city is Canberra. Located 288km south of Sydney and 647km north of Melbourne; it’s Australia’s eighth largest populated city. You can see an aerial view of Canberra below. 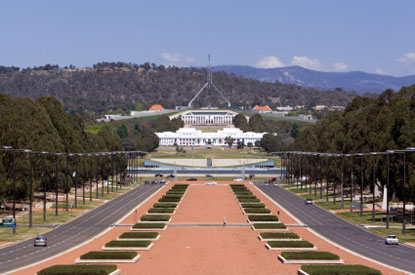 A word of thanks

We would like to say a BIG thank you to one of our dear friends and former students in Tokyo; Michiko Kanai; for sending us the most beautiful flower arrangement.

It adorns our reception counter and the fragrance from the flowers has made our school smell delightful. 🙂

Once again, thank you so much for the heartwarming gesture and constant support. Interesting Facts About Kangaroos No. 3

Did you know that there are over 60 different species of kangaroos and their close relatives?

Different types of kangaroos live all over Australia, from cold climate places through to deserts and even tropical rainforests and beaches.

There are 3 common species:

The Eastern Grey Kangaroo – found mostly in Melbourne and Sydney. The Red Kangaroo – the biggest of the lot. They can grow up to 2m tall and weigh up to 90kg. They are usually found in Alice Springs. Welcome to our School

We are happy to announce that our school is now open for business. We are awaiting your arrival and look forward to having a cup of coffee and a chat with you.

If you would like to take a free trial lesson, then please email or call us to make an appointment.